You can download a pdf of the article at the bottom. This article is translated from Dutch language.

From parent onto child

When Jenny Crone had taken over her father's business, he continued working in the boiler and appliance factory. That could have led to major conflicts. But because father confined himself to the drawing board, there were no problems at all.

"My father and I have never been in each other's way. He is a technician and I'm a manager, " says Jenny Crone, 35, director of the Crone Boiler and Appliance Factory inNieuwerkerk aan den IJssel. She took over her father's company in 1997,
after she had been working there as an employee for two years. Daughter Crone never actually intended to enter the company. "I went to the Pedagogical Academy to become a teacher." Besides, she had a brother and in the world of metal a male successor was more obvious. But her brother had no desire to be a Director and sought employment elsewhere. Meanwhile, Jenny Crone became a teacher and because this wasn't quite fulfilling enough she later worked as a secretary. But this didn't make her happy, either. "It was too superficial," she says.

Never would have thought

The Crone Boiler and Appliances Factory wasfounded in 1959 by Crone Senior.
He focused from the beginningon product development and had appointed a deputy director to take care of business management. The expectation was that he would take over the company, but that was ultimately not the case. The deputy left.
At the same time Jenny Crone was looking fora new challenge and after consulting with her mother she simply told her father that she wanted to become the new director. "My father never thought of meand would never have asked," she knows. "He didn't want to put the load of running a business on my shoulders, but I know it was his secret wish. This way he would be able to take a step back."

After a trial period as a script-of-all and later as deputy director, with the support of a specially appointed interim manager, Crone bought the companyfor the real market value. A subordinated loan from her fatherprovided the necessary financial leverage. Following the acquisition Crone basically followed the path that her father had laid out. Slowly but surely, she began to reshape the company. "I gathered my ownpeople around me, hired another accountant, wrote an annual policy plan. In short: I started to work more efficiently, which is the norm nowadays. Later I switched to a different advertising agency and had them develop a new house style."

Thus, Jenny Crone made an increasingly bigger mark on the boiler and appliance factory. Without ever compromising the original vision of her father, who after the acquisition remained active in the company on a twenty hour basis. "He is the man behind the drawing board," Jenny says. "That's his strength, I am a very different person. That's why I feel I am not really following in his footsteps. I hope to continuewhat he has built,but my father will not criticize me for the way in which I choose to do it. He respects me." And her brother? "My brother is a just and down to Earth man, who fully realizes that with my privileges come a lot of worries."
In the beginning those worries kept her up at night, but now Crone is used to the responsibility. "No one can help you, your worries are your own. Well, I can talk to my father, but eventuallyI have to make the decisions."

The course of Jenny Crone and her team is aimed at strongly expanding exports. To this end, Crone has obtained the necessary quality certificates and now the gray and red colored boilers are being used by horticultural companies around the world. "Because you are your own boss, you can choose in which direction you want to go. That applies in particular to my personal development. If you are employed you are totally at the mercy of your employer. I can explore those things that I find interesting, determine my own center of gravity. I am currently working on a marketing planfor all countries to which we export."

For Jenny Crone, running a private business is not just a job; it's a way of life. "I think of it like being a professional athlete. You always have to be alert, you cannot afford to doze off. You have to keep up to date in your profession and make sure you are in good shape. So I take care of myself, just like a pro athlete. I eat healthily, get a lot of exercise, walk my my dog Otje every day for an hour and get enough sleep. If you don't take care of yourself, you'll fail and you can't do that. Because you are responsible forover thirty five employees." 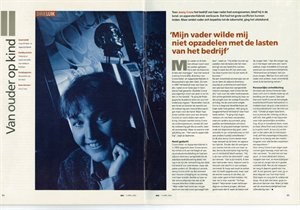