An article about how I sold my company in 2008. I made a conscious choice to use knowledge and experience in a different way.
You can download a pdf of the article at the bottom. This article is translated from Dutch language.

From teacher to director of a business worth millions

JENNY CRONE (44) just stepped down as director of W.K. Crone BV, the metal company she owned after buying it from her father. "I never want to be an employee anymore. That has become impossible. "

She has nothing but time, what she'll do next Jenny Crone does not know yet.In any case she'll be a mentor and manager. And she's going back to school. Crone likes surprising career steps. After teaching academy she spent three years in the classroom, after that she worked as a secretary and finally she took over her father's business. Personally she finds her that her career makes sense. "As a secretary I always kept my ears and eyes open." Plus, the family business was in her blood, she grew up with it.When her father wanted to quit the company in 1995, she decided she was up for a new challenge.Her brother had no interest and a business friend of herfather's - and director of the company - asked her personally if she wanted to be in charge. Times were hard for the company heavy weather and was an unattractive sales party. 'That conversation took place just before Pentecost. During the holidays after that I thought about it and decided to do it. I was looking for something more profound, anyway."

However, the director did not turn out to be as friendly as she and herfather thought. Now she sees it clearly. "He took me in as a puppet, because he wanted to make a profit as quickly as possible by making a sale." She found out through her employees who saw how he was walking around taking big steps, measuring up the terrain. "He thought he could sell the plot,"she says cynically. Crone wanted none of it and when she started to receive phone calls from her accountant and the bank about his unwanted business, she fired him immediately. On his way out, the man quickly transferred 500,000 euros tohis private account. Looking back, it seems like a corporate soap opera. The money was retrieved and the feeling that the company had to be looked after had only become stronger.

To help the new director and owner on her way Crone was supported weekly by PricewaterhouseCoopers. At the time, Crone BV generated a revenue of around three million euros. Soon after revenues were on the rise. Crone continued to make changes and obtained international certifications, so that the company gained a strong position on the American and Canadianmarkets. At the end of 1999, Crone decided to invest money in growth. About that she now says: "That was the thing to do in those days. You had to grow." The company was doing so well that she made those investments with complete confidence. But then the economy collapsed in 2001. A bitter disappointment followed. "You work so hard to get out of one hole and then you fall into the next."She felt like she was standing on new crossroads in her life. Especially when not long after that her husband said that he too had the ambition to start his own business. For Crone everything fell into place. 'One entrepreneur in our household seemed more than enough to me. It was time to sell my company."

Selling was not as easy as she initially thought. "Vultures sat at my table, who were purely looking for profit. I wanted the company to be in good hands, first and foremost. It applies to all family businesses: continuity is the most important thing."In 2004 she finally found a suitable party within the same industry. Unfortunately for Crone, that company had made another acquisition with bad results. Crone: "That was very disappointing. "But despite all the setbacks, she pressed on. A year later she herself was approached by a financial party. That turned out to be a good match. "They bought in and I stayed with half of the shares still in my possession. The nice thing was that they incorporated an interesting metal company. I was allowed to guide that transition process."

In 2008 she received the participant's offer to sell the rest of her shares. She went with her gut and accepted. "You're not going to get rich running a metal company." In retrospect, she was very lucky with following her intuition. She was just ahead of the economic crisis, though it remained avery emotional step. "My father was sad that his company was no longer in the family, but he has accepted it. Still, it hurts. I resolved it with counseling and now I look forward to my second career. Or third." 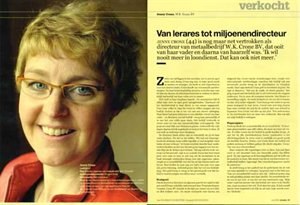